DO Watch the Words You Use in Your Sales Position 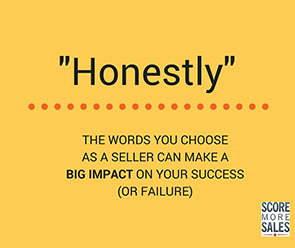 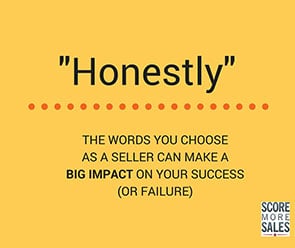 Whenever I read advice that can be interpreted wrong within our profession of selling I get a little edgy. In this case, I read a new post from highly respected sales expert Dave Kurlan called Sales Performance – Stop Worrying about the Words You Say.

I rarely disagree with Dave as his foundation is built on evaluating systems, processes, and people for sales teams. He has an international reputation as a sales thought leader. His Baseline Selling book shares his philosophy on growing revenues.

Saying not to worry about the words you use in selling grabbed me.

(I think that was Dave’s goal..... he is a good writer and knows how to get my attention)

The post really talks less about words and more about the importance of enough good sales coaching and an emphasis on supporting reps to work the steps of the process to get results.

If a sales leader only focused on vocabulary for their reps, I agree – stop worrying about the words they say and focus on the bigger picture.

With that said, I have seen deals stall, deals be lost, and meetings not happen based on the words that a BDR, SDR, AE, or BDM chose. This is not a one-time thing, but a regular occurrence in B2B selling.  Sales reps don’t get good training in word usage – and I’d include spelling and grammar alongside this.

Right now we have a rep we are working with who says “Honestly” at least 3 times in nearly every conversation. It’s down from 5 times… he is working on it. Of all the words you could have as a crutch word, HONESTLY is the WORST (other than profanity I guess.)

In this case a single word, used repetitively, builds negative credibility. He gets more stalls and less “next meetings” set because of it.

If someone you work with in sales says a single word over and over – peppering their language with a crutch word, that also hurts their credibility and ultimately opportunities. I’ve heard “You know” and “right?”

Sometimes this can just be irritating – like when someone says “obviously” but it isn’t obvious at all. They start their sentences with “So…….”

Irritation is fine, but lost business is another issue altogether.

Be a better rep when it comes to words. They have power.

I totally agree that good sales process and good sales coaching IS more important than simply changing out words. My push is for ALL THREE – process, coaching, and word power.

What words do you hear your fellow reps or those on your team say?

Lori Richardson is recognized on Forbes as one of the "Top 30 Social Sales Influencers" worldwide and is a Top 25 Innovative Sales Blogger. Lori speaks, writes, trains, and consults with inside sales teams in mid-sized companies. Subscribe to the award-winning blog for sales strategies, tactics, and tips.
Increase Opportunities. Expand Your Pipeline. Close More Deals. Develop Sales Leaders