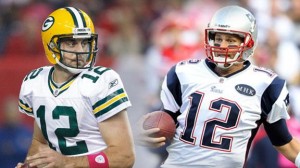 Does anyone doubt your potential success in selling? Do you doubt it yourself? When I was a new sales professional I did question myself a lot. While I was confident enough to get my early sales positions, I was not confident about the products and services that my company offered until I really knew them well. In fact, I was not always confident about the company I represented - and lack of confidence shows.

This week, Green Bay Packers Quarterback Aaron Rodgers was interviewed on 60 Minutes - an interview I highly recommend you watch here. In the interview you can see how Aaron took his underdog status and made it work to his advantage. You can also learn a lot about the town of Green Bay, Wisconsin - the smallest town in the NFL - and the only NFL team that is a publicly owned, non-profit organization. The fans own the team. What a concept.

After I saw that broadcast, I then heard a radio interview with New England Patriots Quarterback Tom Brady. You can hear it here, and again, I highly recommend it, especially after the 2 minute mark. What I loved about it was hearing Tom talk about rookie quarterbacks, expectations and hard work.

You can't disregard the similarities of high-stakes, professional sales and players on athletic teams. Brady said, "You have to be ready - everyone is counting on you."

He also said that his coach, Bill Belichik expects everyone to do their part on the practice field.

"I still think I have a lot of room for improvement. Once you feel you know it all, it is time to move on." He went on to say that he was blessed with a "hard work ethic".

Aaron Rodgers talked about being an underdog who became MVP. He was the 24th pick in the 2005 NFL Draft instead of one of the top few picks the media talked about. Many doubted his success not just in the NFL, but even in college. He has all of his college rejection letters. Once he got in the NFL, he sat on the bench for the first 3 years.

Rodgers says, "Your demeanor and attitude are so very important" when in a huddle - even if he's stressed.

Take a look and listen at these and see how they apply to you and your career in professional selling or sales leadership. Find other ways to get inspired, because inspiration can take you to the finish line.

I've written before about how it takes work to be mediocre. Isn't it time you pushed for your own excellence in your career and exceed yours and other's goals for yourself?

Whose success story can you look to for inspiration?

Lori Richardson is recognized as one of the "Top 25 Sales Influencers for 2012" and one of "20 Women to Watch in Sales Lead Management". Lori speaks, writes, trains, and consults with inside and outbound sellers in technology and services companies. Subscribe to the award-winning blog and the “Sales Ideas In A Minute” newsletter for sales strategies, tactics, and tips in selling.