A Sales Challenge to Be The Best You Can Be 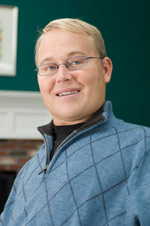 It was an honor this week to hear inspirational professional speaker Travis Roy talk to a high school audience.  For the last 18 years, Travis has been paralyzed from a fluke accident while going after his dream of becoming a Division 1 college hockey player.

I know of Travis, and have for 18 years. He and I share a birthday, and he graduated from the same high school my son did, one year before my son began attending there. The legacy of Travis Roy was all over Tabor Academy - everyone admired him and a number of athletes there wanted to be like Travis - as a standout, gifted athlete with a scholarship to one of the best schools in the country - Boston University.  Turns out Travis could have gone to many other schools who tried to recruit him as well.

Travis prepared for college, hoping he would have a chance to play in the first game for the Boston University Terriers. Usually Freshmen don't, but Travis was a standout. He'd worked hard with a goal of playing at this elite level.

He got his tap on the shoulder during the game that it was his time to go on the ice. All of his efforts from the time he was a boy growing up in Maine, spending hours on the ice would culminate in his first shift at BU. Travis skated out, followed the play, and just 11 seconds in, went into the boards in just a way that his world would never be the same. He sustained an injury to his spinal cord that caused him to become paraplegic.  His story is told fully in 11 Seconds, a book he wrote in 1998.

I hadn't seen Travis in years, and was glad to see how good he looks. What was most important was his core message to this audience of high school students (and a few of us adults). Of all the things that Travis talked about, what really clicked for me in relation to the sales profession I'm involved in are these two points:

Take personal pride in what you do.

Find a passion, and then find out how good you can be.

It hit me that we don't talk a lot about pride even though we demonstrate, or work to demonstrate it every day. At the end of your week as a seller, do you feel proud of what you've accomplished? If not, what can you do next week to have that feeling of accomplishment?

If you are just going through the motions, or doing something just for the potential monetary rewards, you will not be fulfilled. That ties in with Travis' second point about seeing just how good you can be. Whether you participate in company or team contests, you can also have your own standards to live up to. You can push yourself.

Have you ever seen how far you can take your career? Or are you mediocre, just showing up and putting your hours in?

Travis also talked about how you have to change-up your goals when life throws you a curve ball.  Instead of playing hockey in the Olympics, Travis has carried the U.S. Olympic torch. He is a motivational speaker now, with new goals, and inspiring thousands along the way.

It is hard to believe it has been 18 years since Travis' accident. Travis has an amazing foundation called the Travis Roy Foundation that has raised millions of dollars for spinal cord research and also to give grants to those with spinal cord injuries for wheelchairs, ramps and other needed equipment.

I didn't get a chance to talk with Travis but want to wish him continued success. There were tears flowing among some in our audience this week, and Travis received a standing ovation - from high school students, no less. I hope he keeps up inspiring others because he is making a real difference.

Lori Richardson is recognized as one of the "Top 25 Sales Influencers for 2013" and one of "20 Women to Watch in Sales Lead Management for 2013". Lori speaks, writes, trains, and consults with inside and outbound sellers in technology and services companies. Subscribe to the award-winning blog and the “Sales Ideas In A Minute" newsletter for sales strategies, tactics, and tips in selling. Increase Opportunities. Expand Your Pipeline. Close More Deals.