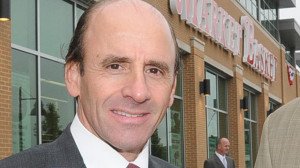 It is easy to lead when all is going well - and challenging when there are issues. That's when true leadership really shows. Today's post is for sales professionals and sales leaders, because at one time or another everyone leads.

You could not have been in New England this summer without hearing about the big Market Basket grocery chain and all of the turmoil when the board of directors fired their current president, Arthur T Demoulas. It became a national story due to the workers walking out for so long The family business had in-fighting between cousins in power - and Artie T as he is affectionately called, was fired. Much more can be read about the story in the Boston Globe's account here.

What was so surprising to me and many others was the loyalty of the employees and customers for their company president, Arthur T. Employees staged a walk out - and were out for six weeks. The company hemorrhaged money and finally Artie T was brought back in a buyout to lead Market Basket now and into the future.

Usually employees complain about something for a while, then if it hits too hard in the wallet, we back off. Not in this case. People were SO loyal to the cause, it was truly amazing and will surely be a Harvard Business School case study in the future about loyalty toward a strong leader. Why did employees stand behind Artie T so fiercely? Who has heard of a worker revolt at a non-union company?

Artie T. tells employees he loves them - and it appears that he really does. He claims to be equal to everyone at the company - including the customers, vendors, and employees. He was responsible for above average wages at the grocery chain - and responsible for keeping prices lower than other grocery stores in New England.

People said that Artie T knows many employees in the chain by first name, and is a hands-on leader.

A big take away from this summer-long saga is that actions really do speak louder than words.

How are you leading today?

If you are a sales rep, are you leading with your prospects and existing customers?

If you are a sales rep, are you updating your sales manager before he or she comes to you for updates?

If you are a sales leader, are you leading your team by example?

Now is the time to show up and stand up - and let your actions speak loudly, not your words.

Lori Richardson is recognized on Forbes as one of the "Top 30 Social Sales Influencers" worldwide. Lori speaks, writes, trains, and consults with inside sales teams in mid-sized companies. Subscribe to the award-winning blog and the "Sales Ideas In A Minute" newsletter for sales strategies, tactics, and tips in selling. Increase Opportunities. Expand Your Pipeline. Close More Deals.

email lori@scoremoresales.com | My LinkedIn Profile | twitter | Visit us on google+