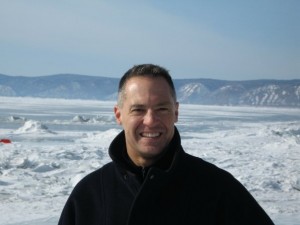 This year I met Mike Pierce, also known as “Antarctic Mike” when we were both speaking at a sales industry conference. Mike has the distinction of having run back-to back marathons and a 100km “ultra” marathon in Antarctica. Before going to Antarctica, he trained in a huge freezer. I've been fascinated with Mike’s stories and how they relate to the mental part of selling so we had a discussion about the mental aspects of selling and how it relates to the training he did for his Antarctic adventures.

LR: Mike, how do you know so much about Antarctica?
AM: I know a lot about Antarctica because I'm a student of history and have been for about 10 years. I've read more than 100 books on the subject, asked questions of experts and seen many news and video stories. I eat it up!

LR: What are the top 3 things you have learned from Antarctica that apply to sales?

AM: The top things I've learned from Antarctica that have to do with sales, are:

1) Preparing for difficult challenges (Antarctic or sales), is mostly a mental challenge, not a physical one. This translates directly into sales, in that the most important aspect of selling is NOT product knowledge, sales skills, phone skills, etc. This is like the physical training an endurance athlete goes through for places like Antarctica. The most important training is conditioning the mental muscles through repetition, monotony and things that require extreme focus on something that seems like it will never end. This is where running laps in the freezer came into play.

2) To reach big goals, you have to change your definition of difficulty. After running the 100km in Antarctica, I never looked at a marathon in the same way. A marathon is 26.2 miles, but the 100km was 62.1 miles. Before running a marathon in Antarctica (my first of two trips was to run just the marathon, not the 100km), it seemed like a long way. After I ran the 100km ( my second trip), I never saw a marathon as being that long. The light bulb that went off is that difficulty is relative and I have much control over changing my definition of what difficulty is and is not. 6 years later, to this day, I don't train for marathons and don't see them as that long. I can literally go run 26.2 miles on any given day I want, and I've done this about 8-10 times since Antarctica.

3) I've learned that you have to pursue what you are really passionate about and some how make those interests and passions come together at the intersection of what you do for a living. If you don't you're like a car without an alternator, and eventually you run out of power. I am very successful selling my speaking engagements and executive search assignments because I'm very authentically passionate about what I do, why I do it and who I do it for. Most sales people are not, and thus, there are many many sales people who are just average and not super.

LR: What was the worst part about Antarctica?

AM: The most difficult thing About Antarctica was actually leaving that place. I cried when I got on the plane to go home, literally. I honestly did not want to come home. I was never frustrated and never did I think I could not complete what I started. The reason this is the case is because I made the training so hard, it was almost impossible and ridiculous.

I learned as a young boy playing hockey in Philly something my coach told me that I"ve never forgotten. He said "You will play the game the way you practice. If you make the practice harder, the game goes easier." And he skated away. That was when I was 10 years old. When I went to Antarctica I was 40. I thought to myself in the freezer, "if I make this really hard and can run a marathon here in the freezer, when I get into the real thing, it will be that much easier." And it was. I ran a full marathon in the freezer before going to Antarctica. IT boosted my confidence like you wouldn't believe. The marathon in Antarctica took me 7 hrs and 15 min. It was very difficult to finish, as I ran the last 5 miles into a 50mph headwind. I was the last guy to finish out of 9 runners. I did not care at all about this. However, that was easier than running a marathon in a freezer, in which I had to run 486.5 laps around pallets of frozen chickens, pizzas and french fries. Make the practice harder and the game goes easier. Many sales people would benefit significantly if they knew this and actually did something with it.

-- You can learn more about Antarctic Mike Pierce here. Mike and I are teaming up in 2013 on ways sales teams and sales professionals can be more accountable to accomplish bigger goals. Stay tuned for that!

This post was written as part of the IBM for Midsize Business program, which provides midsize businesses with the tools, expertise and solutions they need to become engines of a smarter planet.

Lori Richardson is recognized as one of the "Top 25 Sales Influencers for 2012" and one of "20 Women to Watch in Sales Lead Management". Lori speaks, writes, trains, and consults with inside and outbound sellers in technology and services companies. Subscribe to the award-winning blog and the “Sales Ideas In A Minute” newsletter for sales strategies, tactics, and tips.